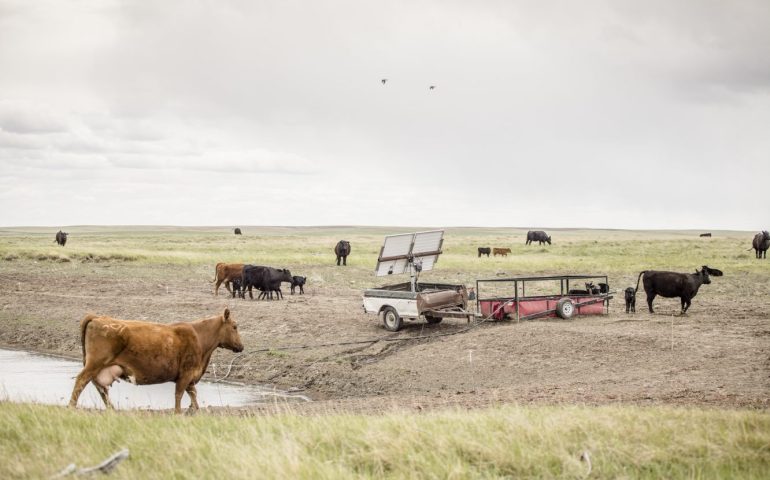 If there is a water line to add, a tank to set, or a unique water set up to try, it’s likely Dusty Emond has done it on his ranch south of Malta, Montana.  Of the nearly 12 miles of pipeline on his place, six new miles were added just last fall following the harsh drought of 2021 to send water to an additional 7,500 acres that could not be utilized by cattle last summer due to a lack of water.  However, along that pipeline there are yet to be any tanks.

“Even this year, we will have at least 20,000 acres that will be un-grazeable without portable water that literally has no water in stock reservoirs,” Emond said.

In a widespread drought where feed sources are already scarce and ranchers statewide are seeking pasture leases or hay, having 20,000 acres of grass that can’t be utilized due to a lack of water is ironic to say the least and detrimental at worst.  In an effort to utilize more of that pasture and make use of the new pipeline addition, Emond partnered with the Ranchers Stewardship Alliance (RSA) to purchase two portable water tanks and one permanent winter tank.

“In normal conditions, we were adequately watered. Given the last couple years of drought, we’ve had to drop our grazing considerably and water is my next most important key step to staying profitable and being able to utilize my grass,” Emond said.  “The nice thing about this is we can now set them different places than where the reservoirs are to help spread out our grazing distribution.”

The Tomcat MFG portable water tanks are designed with mobility and ease of use in mind.  The tanks can be moved daily, if need be, and once drained can be hooked on to anything from a four-wheeler to a pickup to pull to the next location.  Emond has one of his portable tanks paired with a solar powered pump, also in an easy-to-move trailer, pumping water out of a stock reservoir that is too low for cows to access.  When not filling out of a reservoir, the portable tanks can be quickly moved to the new six-mile water line where one of eight hydrant locations will become a new water source.

“I’m leaning towards the rubber liner portable water troughs just because I can drain them, hook them up, and be gone in no time,” Emond said.  “The big fiberglass tanks I have to drain one day, go back the next day with a tractor and load them on a flatbed trailer and move them.  Fiberglass that are set permanent are quite nice, but they’re also permanent and I’m getting enough hydrants that I don’t want to buy that many tanks.  So, the rubber portable is the most adaptable.  But probably the best long term is a permanent fiberglass.”

Funding from his RSA partnership was also used for the purchase of one permanent winter tank.  The new permanent tank will allow for grazing on one and half sections of deeded land that otherwise couldn’t have been winter grazed.  Given the cost of major projects like new water pipelines, the partnership with RSA has helped Emond increase water availability, for both summer and winter, on his ranch.

“They have definitely helped offset some of the cost,” he said.  “I keep doing all these little experiments and stuff, so it helps to offset the cost. Most of it I would probably have done on my own, just at a slower pace.”

That slower pace is tough to afford though when drought is causing destocking and altered management plans.  Emond runs cow/calf pairs and some stocker cattle, as well as sheep and goats.

“I was kind of an early bird and I sold cows faster than everybody else with the theory that I would grow grass and be able to rebuy faster than everyone else,” he said.  “I destocked more significantly than most of my neighbors last year, but also I didn’t have that other water line in.”

Emond maintained more sheep and goats than he did cattle last summer as their input requirements are lower.  This diversity in his operation proved beneficial as drought drove many management decisions.

“We had the sheep and goats before the drought, but last year I was able to graze some pastures that didn’t have enough water for cattle. We used the solar pumps and pumped for the sheep because they took less water,” Emond explained.  “I am seriously considering expanding the sheep business because they need less water and can do better on lower brix feeds. We didn’t start with sheep for that reason, but we will probably expand for that reason.”

As ranchers face many variables like market conditions, rising operation costs, and adverse weather conditions, they must seek creative ways to simply stay in business.  Keeping ranchers on the range is one of the main goals of RSA, and their many conservation partners see the value ranchers play in the ecosystem.  For example, Emond’s ranch consists of miles and miles of connected native range which provides critical habitat for not just his livestock, but many wildlife and game bird species including Sage Grouse.  RSA’s conservation partners have prioritized preventing conversion of such range into cropland.

“If it can be grazed and kept in grazing long term, then hopefully it doesn’t ever become plowed because plowed native range doesn’t go back to being native range,” RSA Conservation Coordinator Martin Townsend said.  “We can plant native species, but it’s not the same thing.”

So, while the purchase of two portable water tanks and one winter tank may seem to have a minimal impact on such a large ecosystem, for Emond, it means accessing thousands more acres for grazing during drought, and for wildlife and birds it means the preservation of the native range they call home.

“If we can build a relationship with ranches and keep them enthused about ranching longer, the most successful wildlife habitat is often on working agricultural lands,” Townsend said.  “In fact, 70 percent of the best habitat in Montana falls on private lands and in an area that RSA works in that’s well over 50 percent public land, being able to work on those private lands and provide support through conservation is a huge win for wildlife for years to come.”

The Ranchers Stewardship Alliance (RSA) is the leading force behind positive change for our rural communities in the Northern Great Plains. Through implementing conservation programs, connecting ranching communities, and leading educational outreach efforts, the Ranchers Stewardship Alliance (RSA) serves to improve the quality of life and promote land stewardship for generations to come.